An astonishing number of people have developed diabetes over the last 20 years in the UK. The risk of diabetes increases with age so that by the age of 70, almost 1 in 3 South Asians, 1 in 3 African Caribbeans, and 1 in 6 Europeans will have diabetes. This is hugely important. We know that diabetes affects every system in the body and that it can shorten people’s lives, particularly because it can cause heart disease and stroke. Not only does diabetes shorten peoples’ lives, it harms the quality of their lives too.

Our findings led us to ask why South Asian and African Caribbean people had more diabetes than Europeans?

The most common form of diabetes in older people (Type 2 diabetes) is thought to be a disorder caused by overweight, particularly when fat accumulates around the waist (abdominal obesity). When we set out on the 20-year follow-up study in 2008 we expected to find that the pattern of where fat is deposited would explain ethnic differences in the amount of diabetes.  Was this true? 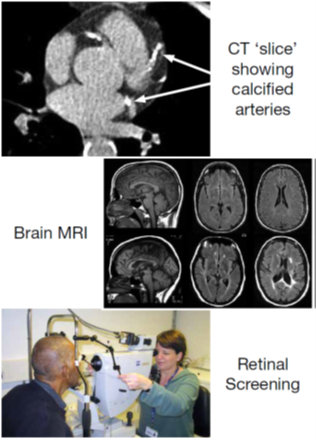 Numbers of strokes increase as people get older. This relationship with age is seen in all ethnic groups.

Interestingly, in study participants who were free of diabetes in 1988-91, there were no ethnic differences in the proportions of people who developed strokes. However, when we looked at people who had diabetes at the time of the baseline studies in 1988-91, we found that South Asian and African Caribbean people with diabetes were twice as likely to develop strokes as Europeans with diabetes over the subsequent two decades.

Using magnetic resonance imaging (MRI) brain scans, we also found that African Caribbean people had more early signs of blood vessel problems in the brain than Europeans and that this was particularly related to having diabetes.

These findings suggest that diabetes is especially harmful to ethnic minority people. We don’t know for sure why this is, but we suspect that it may be because the blood vessels in the brain are more affected by diabetes (and pre-diabetes) making them more vulnerable to high blood pressure and the day to day fluctuations in blood pressure that occur naturally – more research is needed to confirm this.

For more information about stroke, visit The Stroke Association.

The heart is a pump which makes sure that all the tissues of the body receive blood,  and an adequate supply of oxygen and nutrients. As people age or develop heart diseases, the heart may become unable to pump well enough to be able to supply the demands of the body, particularly during exercise. This is called heart failure, and although there are treatments available for heart failure, it is a serious and disabling disorder. Heart failure is more likely to happen when people have already had a heart attack and it may also be a result of high blood pressure and diabetes.

The 3-dimensional ultrasound scans (echocardiography) that participants underwent at the 2008-11 SABRE follow-up gave new information about the early signs of heart failure in our participants. We found that African Caribbean people and Europeans were very similar with regard to the size of the left ventricle (the left ventricle is the part of the heart which is mainly responsible for pumping blood around the body apart from the lungs, and if it becomes enlarged it may be an early sign that the heart is beginning to fail). South Asian people tended to have smaller left ventricles than Europeans when their body size was accounted for, but there was some evidence that the work done by the heart was increased.

Very few SABRE participants had actual heart failure at the 2008-2011 follow-up. However, as participants are moving towards older age, they are more at risk of this disorder.